Due to a more usual summer slowdown compared to the last couple of years, combined with the global economic situation, HWF saw a 17% decrease in enquiry volume in Q3 2022 compared to Q2 2022, however the number of bound deals during the period remained broadly the same. Despite the slowdown in the wider economy, we continue to receive a significant number of enquiries for both W&I and contingent risk policies, with a recent increase in the number of enquiries for deals in excess of £500m EV, indicating a robust pipeline and market through the end of Q4 2022.

Q3 2022 saw a continued increase in the number of enquiries and bound policies in the renewables and infrastructure sectors, as investors looked to deploy funds into sectors which have historically been more stable.

The current economic situation is resulting in an increase in inbound transactions, notably from US PE and sovereign wealth funds. Over the last 3 – 4 weeks we have received several enquiries from US clients and advisors looking to understand the differences between US and UK/European policy terms in greater detail, as they look to explore deploying more capital. We have also seen advisors making enquiries on the use of insurance products in distressed situations as they look to bolster skills in anticipation of an upturn in the number of distressed processes coming to market.

HWF opened an office in New York during Q3. Led by ex Ropes & Gray lawyer Peter de Boisblanc, who previously led the U.S. transactional risk practice of Hub International. HWF are now able to service clients on US domestic transactions through our dedicated office as well as continuing to work with US clients on their investments outside the U.S. This is an exciting development for HWF and further enhances our offering to our global client base.

Future Considerations
• Historical PE returns from funds invested during market downturns have exceeded returns from funds invested during more stable economic conditions. As such we expect investors to remain active over the next 12-24 months.
• We expect pricing to remain competitive as we move into Q4 2022, as market conditions remain uncertain and insurers compete for transactions. We do not expect a repeat of the insurance capacity issues seen in Q4 2021.
• Q4 deal rush – as always, to minimise any execution risk for deals signing at the end of Q4, do contact us as early as possible, so we can commit insurance capital and underwriting resource to ensure the broadest levels of coverage. 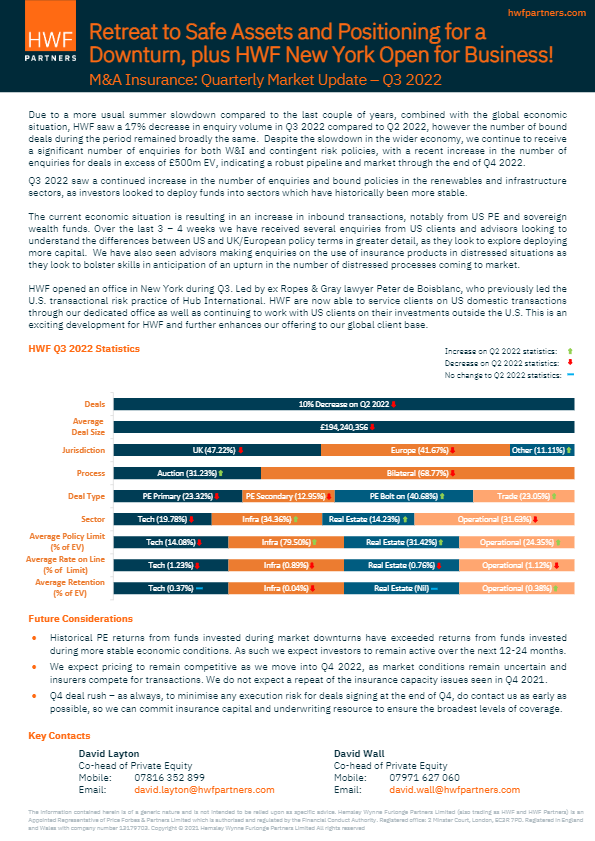