Capacity remained challenging throughout the quarter due to (i) sheer deal volume and insurance capacity constraints; and (ii) increased claims activity. This combination contributed to price increases across all sectors and fewer insurers showing appetite for transactions in non-core jurisdictions and/or markets. Capacity challenges should alleviate as we move into Q1 2022 through capacity renewals and insurer recruitment.

We have greater evidence of claims activity as well as insurers being more vocal about settlements. Closer monitoring of increased claims notifications is required in light of record volumes of M&A trading at record multiples.

• We are seeing an increase in auction processes launching in Q1 2022, particularly hard staple processes, as sellers look to increase competition and drive value for assets with earlier engagement of W&I in their process. This drives an increased onus on deal advisors (particularly bankers) to understand the insurance products and processes.

• As insurers focus more on understanding valuation metrics, certain insurers have sought to include multiplier exclusions or caps on losses where they consider valuation multiples to be too high. We are actively engaging with insurers to alleviate their concerns and to maximise coverage.

• Q4 2021 saw the entry of two new insurers into the market, both focused on mid-market European transactions which should have a positive impact on pricing and coverage for insureds.

• We expect the upwards trend of insuring known or contingent risks to continue. We at HWF and certain insurers continue to invest in a range of specialists to allow a greater number of issues to become insurable. With increased specialism in the market, selecting the right insurer will be critical to a good outcome. 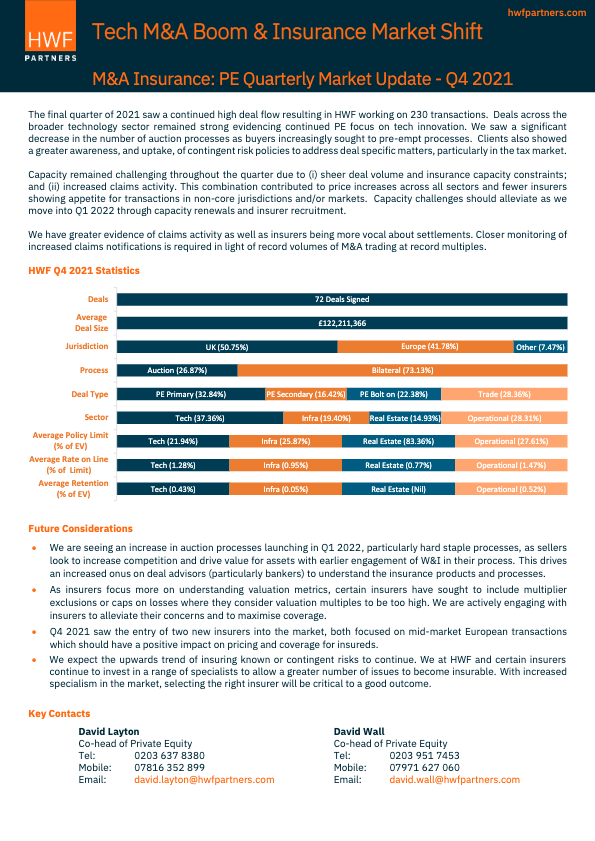