Ever since the implementation of the non-resident capital gains tax rules in April 2019, amending the UK/Luxembourg tax treaty has been sat atop the “to-do” list in the government’s tax treaty filing tray.

Given the impact of COVID, political instability and the capacity drain of Brexit, HMRC can be forgiven, and foreign investors had been thankful that this has been delayed. However, on 7 June 2022, a new tax treaty was signed containing various material changes to the existing treaty. Crucially, changes to the capital gains tax provisions will see Luxembourg finally ceasing to be the last remaining European treaty hideout from the UK’s capital gains net.

Closely following the signing of the new UK/Luxembourg treaty is the publication of a HMRC consultation on sovereign immunity from direct taxation (released on 4 July 2022). The consultation proposes various curbs on the existing exemption from UK direct tax that sovereign investors currently benefit from and indicates a clear intention from the UK government to tax the majority of sovereign investor’s UK sourced income and gains.

The capital gains tax changes to the UK/Luxembourg tax treaty have been written on the wall for some time and simply harmonizes the treatment of capital gains across OECD jurisdictions. However, the proposals within the sovereign immunity consultation are more concerning when assuming that the UK wants to remain an inherently attractive environment for sovereign investors. Yet, as with the 2019 changes to the scope of the UK’s domestic capital gains tax regime, both the new treaty and the sovereign investment proposals continue the UK government’s focus on taxing income and gains from UK real estate.

A considerable number of investment structures currently derive the benefit of the UK/Luxembourg treaty relationship. Where a Luxembourg resident seller disposes of shares in a UK resident property holding company, the existing treaty allocates the taxation of gains arising on the sale of sales to the country in which the seller of those shares is resident.

In principle, this treaty relief offers a backstop to prevent tax arising under the UK’s current domestic non-resident capital gains tax and transactions in UK land regimes (subject to anti-avoidance and, in respect of the foregoing, anti-forestalling rules). Given that the new treaty will not enter into force until April 2023 at the earliest, taxpayers do have an opportunity to review current investment structures and take any appropriate action to mitigate the impact of the treaty changes.

THE ROLE OF SPECIFIC TAX INSURANCE

Where investment structures are being reviewed as part of the upcoming changes, specific tax insurance can be used by sellers to lock-in treaty benefits – protecting investment returns and facilitating fund wind-up(s) on a disposal.
Insurers are willing to underwrite treaty claims where there is a sound legal basis for the treaty claim being made and this is reflected in appropriate legal advice detailing:

1. the financial exposure (i.e., the tax together with interest and penalties) being relieved by the treaty claim;
2. the technical basis for the treaty claim; and
3. an analysis of the applicable anti-avoidance and anti-forestalling measures.

The tax insurance market has never been better placed to insure risks of this nature. Over the last four years the number of primary tax insurers in the market has more than tripled. This has led to a larger amount of overall insurance capacity and a considerably broader scope of risks that can be insured – from purely technical questions of law to factual and valuation based risks.

HWF’s tax team can advise on and source specific tax risk insurance policies to help manage treaty claim risk. Please do get in touch if you would like to discuss any of the above or you have any questions regarding the use of specific tax insurance. 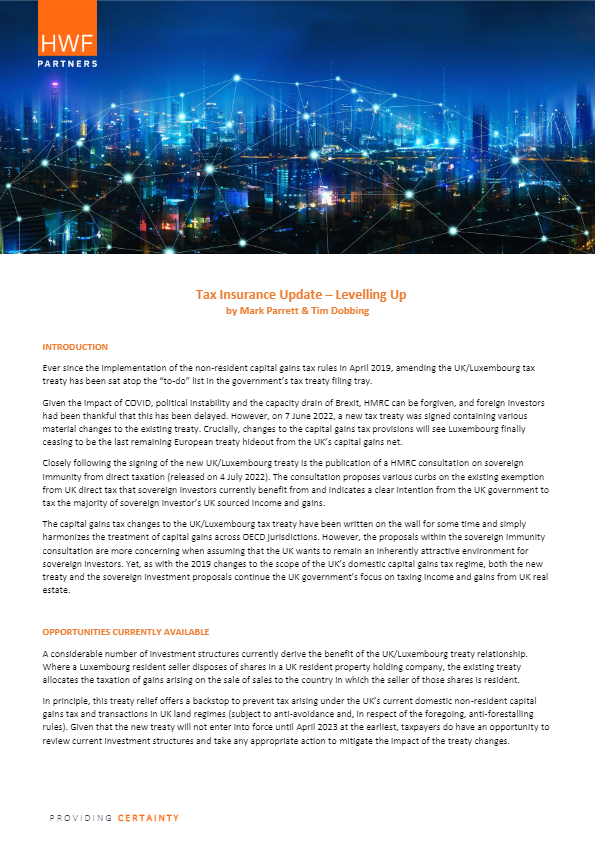